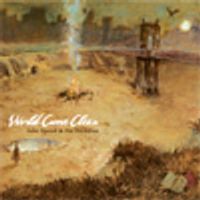 From the recording World Come Clean

A Midsummer’s Nightmare or Jake Speed’s Inferno By: Jake Speed 8/06/06
I woke up in the woods one hot midsummer’s day
I didn’t know where I was or how I came to be misplaced
I blew on my harmonica to try to get some help
When right out from a burning bush stepped a Cuban elf
He wore a military suit, had a beard, smoked a stog’
“My name is Fidel Castro, I’ll show you where to go.”

I didn’t feel like following, the whole thing was kind of weird
But I’m terrible with directions and I was nervous about his beard
I asked, “Where are we headed?” He said, “Right through this gate.”
I said, “It’s hot as Hell in there!” He said, “Oh man just wait.”
The gate sign read abandon all hope if through this gate you pass
I asked, “Is this the White House gate?” He said, “No, it ain’t that bad.”

Once we stepped inside, my eyes both stood aghast
I clung tight to Castro like the Pope clings to the past
We saw gas-guzzling drivers yell as prices rose higher
Then gladly drive out 30 miles to save money at Meijer
We saw vicious voters beat down the voting booth doors
Voting no to all new taxes, voting yes to go to war

We headed in a bit deeper, the heat made my blood boil
We chanced upon a river, it ran with fiery oil
And swimming in that swill was an evil-looking beast
It was an American bald eagle and it was fueled by the Middle East
I asked Mr. Castro, “How will the beast ever let us pass?”
“We’ll say “remember 911,” wave the flag, and cut his tax.”

Down, down we flew through that brimstone and smoke
Castro said he’d like to introduce me to some folks
I met one star-studded athlete who doped up and got blamed
I met a 1,000 unnamed athletes that doped up just the same
I met wily politicians who maxed out the minimum wage
I met corporate CEOs on every corner shout HOORAY!

Finally, we arrived at the end of this hellish place
There was a 3-headed monster waist-deep in a frozen lake
The monster said “I’m Lucifer,” but up close he looked more like
He had Osama’s eyes, Saddam’s beard, and Kim Jong Il’s pompadour
I turned to Fidel Castro, I said, “What’s he got in his lips?”
He said, “He’s gnawing on life, liberty, and the pursuit of happiness.”

We emerged out of the pit, we returned to the woods
Castro shook my hand, he said, “We part right here for good”
I waved adios as he ducked back in the pit
Brushed the ash out of my hair and grabbed a walking stick
It was a long way home, but I had promises to keep
I had miles and miles to go before I’d ever get to sleep.